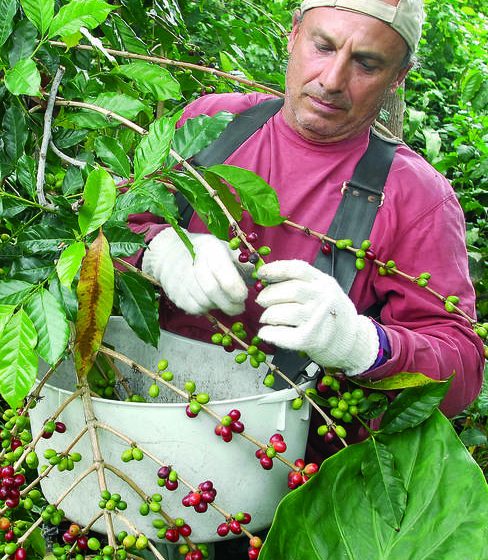 Coffee leaf rust, a fungus that can decimate coffee plantations and whole countries’ coffee industries, was recently discovered for the first time on the Hawaiian Islands. The US Environmental Protection Agency (EPA) moved rapidly to allow the use of a synthetic fungicide in an emergency situation, but fresh research done in the fungus’ native habitat suggests that a hyperparasite biocontrol might be effective.

Coffee leaf rust, caused by the fungus Hemileia vastatrix, was first recorded in Africa in the 1860s. It had spread to Sri Lanka by the end of the decade, destroying the country’s monoculture coffee fields, which were replaced with tea farming. The illness has now been discovered in every coffee-producing country, but it had never been observed in the Hawaiian Islands until late last year.

As a result, the illness is causing alarm among Hawaiian coffee producers. In response, the Environmental Protection Agency (EPA) approved the use of a fungicide named Priaxor Xemium, which contains the active chemicals fluxapyroxad and pyraclostrobin and has been associated to birth and developmental consequences, as well as posing severe risks to birds and aquatic species. Phyllis Shimabukuro-Geiser, chairman of the Hawai’i Board of Agriculture, said, “Hawai’i coffee producers now have an extra technique to tackle the coffee leaf rust, which is exceedingly tough to handle.” Organic farmers, on the other hand, will strive for less harmful management approaches, while conventional chemical producers may choose to apply dangerous pesticides.

A recent study conducted by a group of experts from Sweden and Ethiopia suggests that a biologically based strategy to treating H. vastatrix might be effective. The researchers began their examination in Southwestern Ethiopia, the birthplace of Arabica coffee and its fungus. Over the course of three years, sixty locations with 50 by 50m (164 x 164 feet) plots were investigated throughout the region. The level of management intensity, the quantity of shade offered to the coffee plants, and the biological factors surrounding the farmland all differed amongst the locations.

The goal of the study was to document the interaction between H. vastatrix and another fungus, Lecanicillium lecanii. L lecanii is a ‘hyperparasite,’ meaning it’s a parasitic that targets another parasite. Scientists know that the hyperparasite regulates the rust fungus, but they don’t know how widespread it is, what circumstances it thrives in, or whether it can help with rust suppression in commercial production.