Saints in coffee jars: The relics recovered from a Christchurch icon 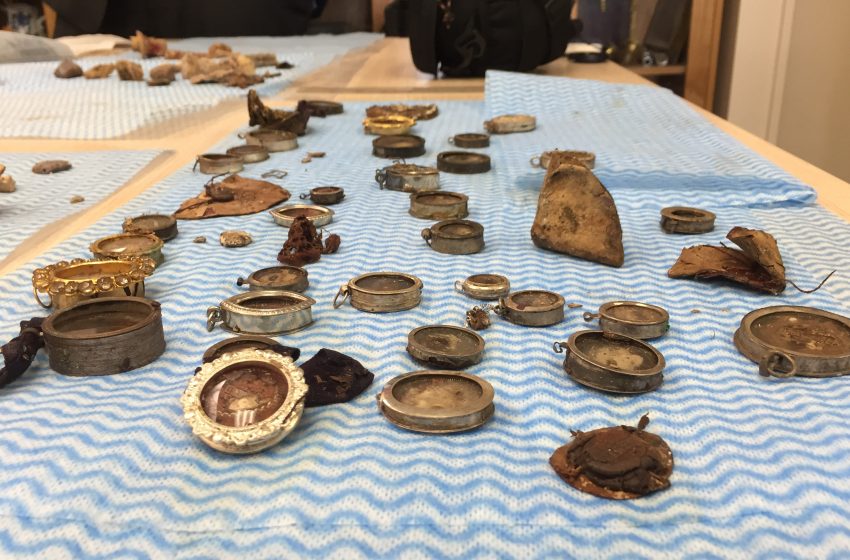 Father Kevin Clark is a happy guy. Last September, the former archivist for the Catholic Diocese of Christchurch passed away. In 1975, he encased a series of holy relics in a steel box underneath the cathedral. It was buried under the base of the Cathedral of the Blessed Sacrament, one of Australasia’s most beautiful churches. In the ruins of the cathedral, Oliver Lewis spends an afternoon discovering an archive of the sublime, mundane, and mildly profane. Bishop John Joseph Grimes SM, the first Catholic bishop of ChristChurch, collected the relics.

Relics are a form of physical memory, as well as a clear and tangible link to the divine. They are artefacts that can be thought of as divine force receptacles. Bishop Grimes kept a huge leather-bound ledger in which he kept authentication certificates. A Latin-language list of saints and martyrs can still be found in the diocese archives. It is possible to track down their authenticity and provenance, particularly those dating from the Middle Ages. Human remains, clearly from people who once lived, were found in one of the reliquaries. It smelled like wet clay and decay, and it was damp and earthy.

Peter Chanel, a French missionary who was hacked to death on the island of Futuna in 1841, is among the bones. The diocese has yet to determine what to do with them, but at least some are expected to be interred in the new cathedral. Thomas Becket – the English archbishop who angered the king and was murdered in his own cathedral in 1170 – is thought to have been among the relics interred behind the new high altar of the Cathedral of the Blessed Sacrament. The structure, which was once considered one of the most beautiful in the region, if not the world, first opened its doors in 1905.

After earthquakes and a fire, the cathedral in Christchurch, England, was completely destroyed. The city’s diocese plans to erect a new cathedral on a more central site. Countless occasions, pieces of bones have washed up on our shores after crossing seas and changing hands. People have revered them as if they were saints for more than a century. The bones are believed to have been transformed into physical representations of the saints by transubstantiation, in the way bread and wine are transformed into the body and blood of Christ. Saint Maximilian Kolbe’s hair was discovered in Boston after he offered to die in the role of a stranger.

The relics are a significant link between Aotearoa New Zealand and nearly 2,000 years of European history. The collection provides a vivid and tangible link to the past for both believers and non-believers. Among the relics was an old Schweppes bottle that had been recovered, full of water, from the flooded metal box. Inside was a scroll of parchment or leather, stained dark brown and with faint text visible on the outside. “Kiwi Jackpot Lottery,” the lettering read.