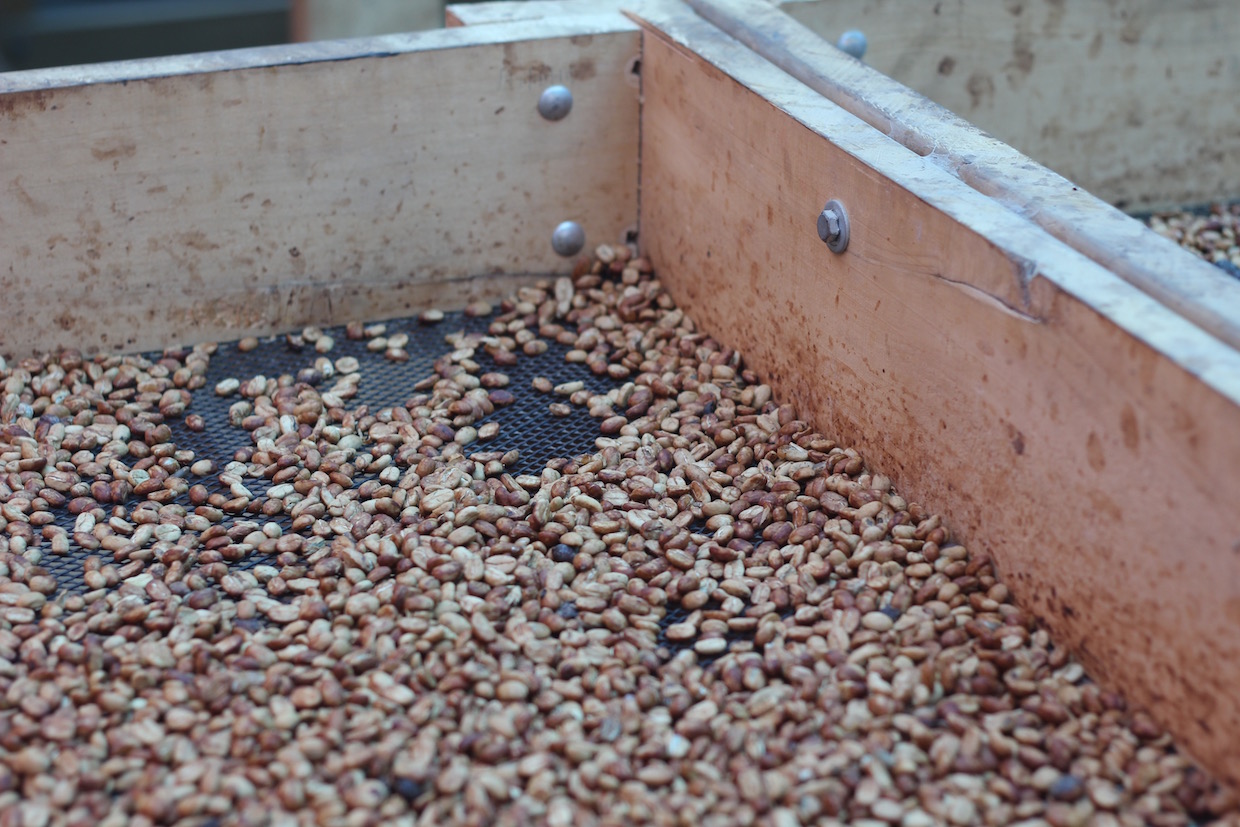 Led by zeitgeisty processing methods such as anaerobic fermentation or carbonic maceration, new ways of developing flavor and removing fruit from coffee seeds seem to be emerging every day.

Even relatively straightforward terms like “fully washed” or “natural” don’t fully convey exactly what’s happening when a coffee producer sends their coffee cherries from the tree to the drying tables.

In anticipation of a class on fermentation and processing styles in coffee, I asked my colleague Evan Gilman to help me create a unique visualization tool to accurately and quickly convey what people mean when they say things like “pulped natural” or “triple washed.” 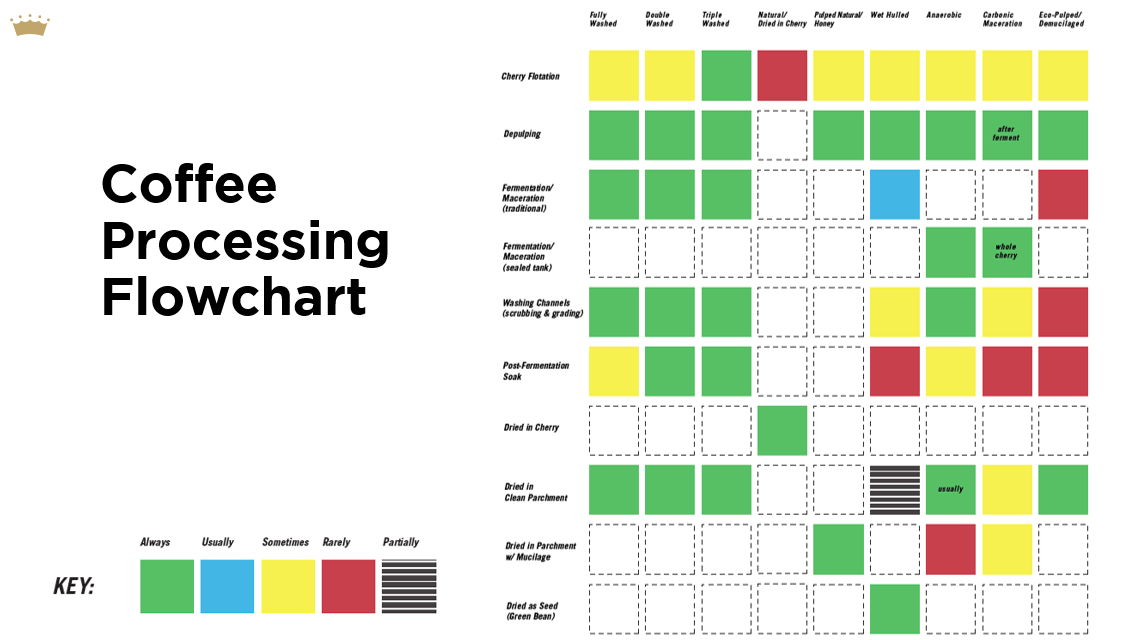 Click here for a larger version of this chart.

Note the color-coded language: Green indicating almost always, and red almost never, with a good amount of ambiguity highlighted in yellow and a few exceptions conveyed through additional shades or text. Such ambiguity comes naturally as not everyone means the same thing when they use certain terms to indicate processing methods.

For coffees dried in the fruit, the problem is less about inconsistency in practice — coffee is nearly always dried, unprocessed, in the whole cherry — and more about the lack of clarity in the name for the process itself. Various terms for the practice include natural, dry-process, traditional-dried, sun-dried or cherry-dried. I tend to prefer using phrases like “dried in the cherry/fruit” or “unprocessed cherry” for clarity.

In my opinion, “sun-dried” is too inclusive: many coffees that are not dried in the cherry are still dried in the sun. “Dry process” is accurate — no water is used to process the coffee — but it could be misconstrued to include dry milling, a term used for export preparation that includes hulling parchment, density and size sorting, and bagging.

“Natural” is probably the most popular term, but also the most egregiously unclear. The word “natural” has been assigned a number of different, often contradictory, meanings in the food and beverage world. If you ask Google “What does natural food mean?” it replies, “food that has undergone a minimum of processing or treatment with preservatives” but the FDA actually has no established definition and simply “consider[s] the term “natural” to mean that nothing artificial or synthetic has been included.”

Natural Wines have also become more popular of late, and the association of the term with wild yeast fermentation and zero additives is attractive, but not entirely corollary.

Washed coffees are so much more than just spritzed with water. Cherries are first depulped to remove fruit, then fermented or macerated to some degree before being washed with clean water and sorted for density. This washing and grading step, usually taking place in long channels, is the defining aspect of fully washed styles of coffee.

Common extra steps might include a whole cherry flotation (to remove rocks, underripes, etc) and a post-fermentation soak in clean water (like we often see in Kenya and Ethiopia). Royal uses the term double washed to indicate the soak, and triple washed to indicate that both extra steps are taken. Cherry flotation often precedes other processing styles, but isn’t always indicated to the roaster by the producer.

Nearly all of this work takes place at a central location called a wet mill, washing station, factory, beneficio, or pulpery. The term wet process has often historically been applied to washed coffees, but as fermentation and processing specialist Lucia Solis points out, these terms represent different parts of the process and aren’t truly interchangeable. “Wet process” may include styles that send coffees to dry without using a wash, like “pulped naturals,” for example.

The terms honey, pulped natural, and semi-washed can be used more-or-less interchangeably to refer to coffee that is de-pulped at a wet mill but usually bypasses fermentation tanks and washing channels to dry with a bit of sticky fruity mucilage still clinging to the parchment.

The first pulped naturals sprung up in Brazil in the early 1990s as a way to produce coffees with flavors more like washed coffee, but which used less water. They were called cereza descascado in Portuguese, which translates to “de-husked cherry,” indicating that the skin but not the flesh of the fruit was removed before drying.

This became known as “pulped natural” in English, indicating the coffee was de-pulped but then dried like a natural without washing. The term semi-washed sprung up first in Spanish-speaking Latin America (“semi-lavado”) and it could be argued that there is a small distinction when used with intent. Semi-washed coffees might employ more water during pulping, depending upon the equipment used.

As a sidebar, it’s also possible to send pulped ”honey” coffee through washing and grading channels using clean water to separate densities, but as far as I know, this is rarely done. I’ve also recently seen a fermented honey, which spent a few hours in a maceration tank and was partially washed before sending the still-mucilage-covered parchment to dry.

In a practical sense, what the the terms honey, pulped natural, semi-washed, etc., indicate is nearly identical. Semi-washed has largely fallen out of favor in English language coffee conversations. In most cases these days, the term “honey” is used to indicate the same process. Varying colors of honey are chosen to vaguely indicate the amount of fruit left on the seed while it dries, from most to least: black, red, yellow, white.

Increasingly we’re seeing fermentation and preparation methods involving sealed tanks of one kind or another, usually with a one-way valve to allow air to move out but not in.

The intent is that by limiting the available oxygen, the types of bacterias and yeasts acting on the coffee fruit will be limited to more beneficial types and that new and exciting flavors can develop.

I took a close look at these terms in a recent article, and the gist is that both anaerobic (no-oxygen) and carbonic (carbon-dioxide rich) are terms that convolute and misconstrue both their role and the role of more traditional fermentation.

Anaerobic is a broad term that seems to increasingly be applied to any sealed, low-oxygen environment. It typically seems to represent coffees that are processed like washed coffees, with the exception that the fermentation takes place in a sealed tank. Sometimes the term lactic is used to indicate the proclivity for lactic acid bacteria to thrive in anaerobic environments.

Carbonic maceration is a wine industry term that, when used in coffee, almost exclusively refers to whole cherry added to a sealed tank and fermented. These coffees are almost always pulped after fermenting and dried in parchment — but again, there are exceptions here.

The lack of clarity as to what these terms mean is fed by the wide variation of techniques applied by different producers and their relative novelty in the field. What we can usually be sure of is that at some point, either before or after pulping, coffee is sealed up, in most cases submerged in water, and left to ferment in a limited oxygen environment.

I think, if we’re trying to be clear, we should probably replace both of these terms with better language. “Whole cherry” or “Depulped parchment” and “Sealed-tank” fermentation or maceration would more clearly convey the processes. Rather than relying on imprecise terminology, highlighting the specifics of what equipment is used and at what state the coffee is in will enable better understanding across the supply chain.

Wet hulling is probably the most commonly exported processing style from the island of Sumatra, and is frequently found elsewhere in Indonesia. The process usually involves a standard washed coffee protocol, which is followed by the removal of the drying parchment while it is still damp and completes its drying as an exposed seed.

Bag maceration, table maceration and other methods of partially over-ripening and “fermenting” in whole cherry, usually in a partially or fully sealed environment are methods resulting in “winey” flavors when done right. I tend to be a little suspicious of these styles as the opportunity for sensory defects seems quite high, but I’ve also had some very consistent-tasting coffees processed in this manor. Occasionally these styles have been labeled anaerobic.

Alternative styles of de-pulping might employ ecopulpers and demucilaginators, devices capable of removing all or nearly all the mucilage from coffee without the need for a fermentation and washing step. Despite their similar workflow to honey coffees and lack of true washing and fermenting steps, these styles are frequently labelled as fully washed.

Additional fermentation steps, mixed fermentation styles, and extended fermentation by intermittent washing and/or temperature control are all being employed to raise quality and lengthen maceration timelines without adverse sensory effects.

Macerating in whole cherry followed by pulped parchment, or employing a dry fermentation pile followed by a wash and then an underwater fermentation, or keeping sealed tanks underground or in air-conditioning might all be various examples of these practices.

While Aida Batlle has famously labelled such practices with country names like “Burundi-style,” a mixed dry and wet fermentation with an extra wash — that, I must confess, I have never observed in Burundi — the industry at large has not yet settled on a consistent language for these methods.

The problem with labels, of course, is that they are by nature reductive. Yet they do provide concise ways to communicate complex procedures — if we all can come to agree on what they mean.

The processing styles employed in coffee production, from the simplest to the most complex, generally suffer from a lack of agreement on language. If we can disambiguate the verbiage used to speak about maceration, de-pulping, and drying, we can begin to agree on terminology to give us common ground in conversation.

Until then, it might actually be easier to be a little longer-winded in our descriptions, especially in circumstances where precision in processing can make or break a coffee’s quality, contracts or even relationships.