How Climate Change May Already Be Affecting Brazil’s 2021 Crop 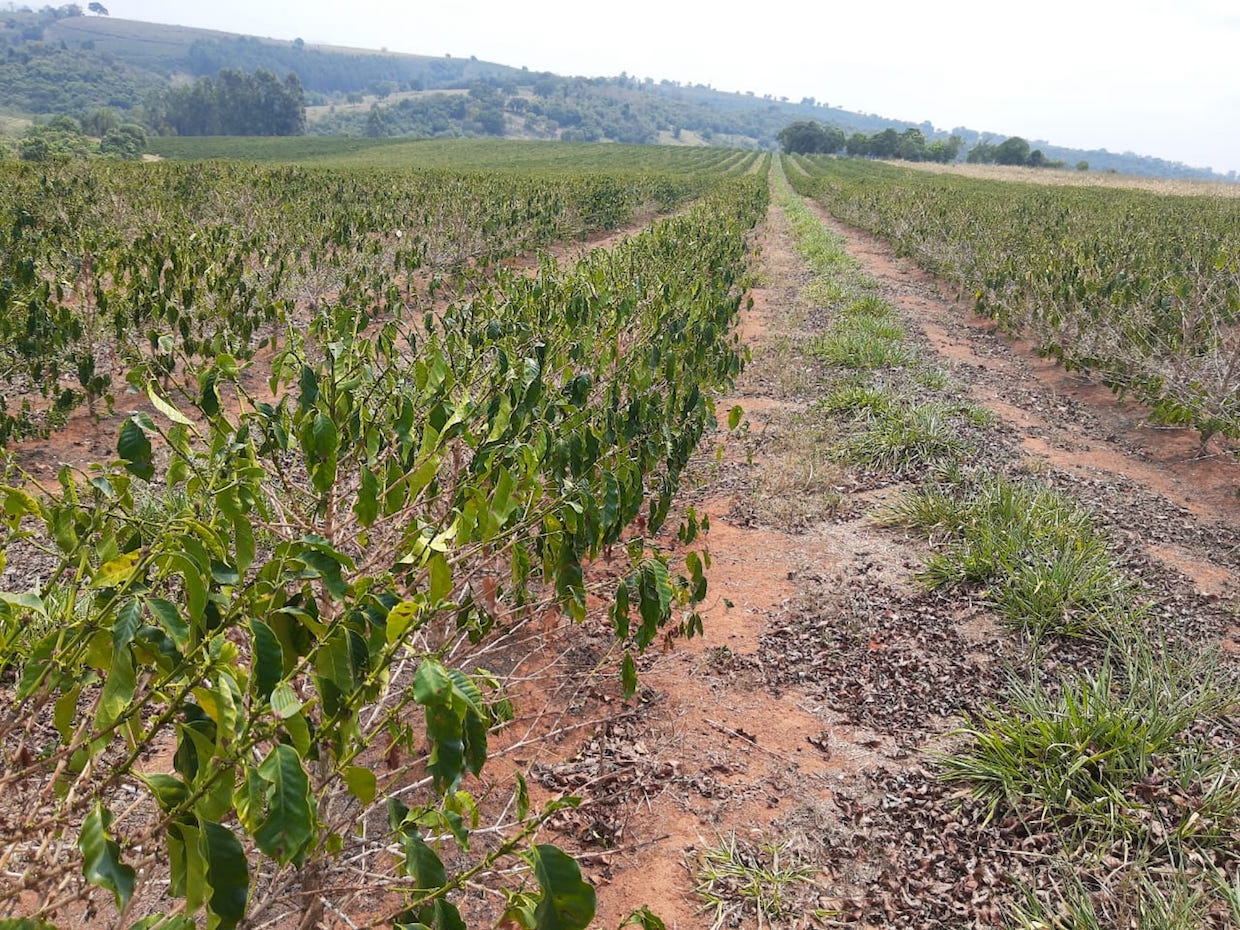 Every year around mid-September, with about 90% of the Brazilian coffee harvest completed, traders, roasters, speculators and financial actors all over the world start to think about projections for the next season.

As the world’s largest coffee producer for more than a century, Brazil’s coffee forecast can have a major bearing on the global coffee sector, and seasonal weather patterns can lead to huge swings in the market.

Yet there is strong evidence to suggest that some of these weather patterns are not merely seasonal, but part of a larger pattern of climate change — one that is threatening the 2021 harvest, and perhaps even 2022, 2023, and so on. 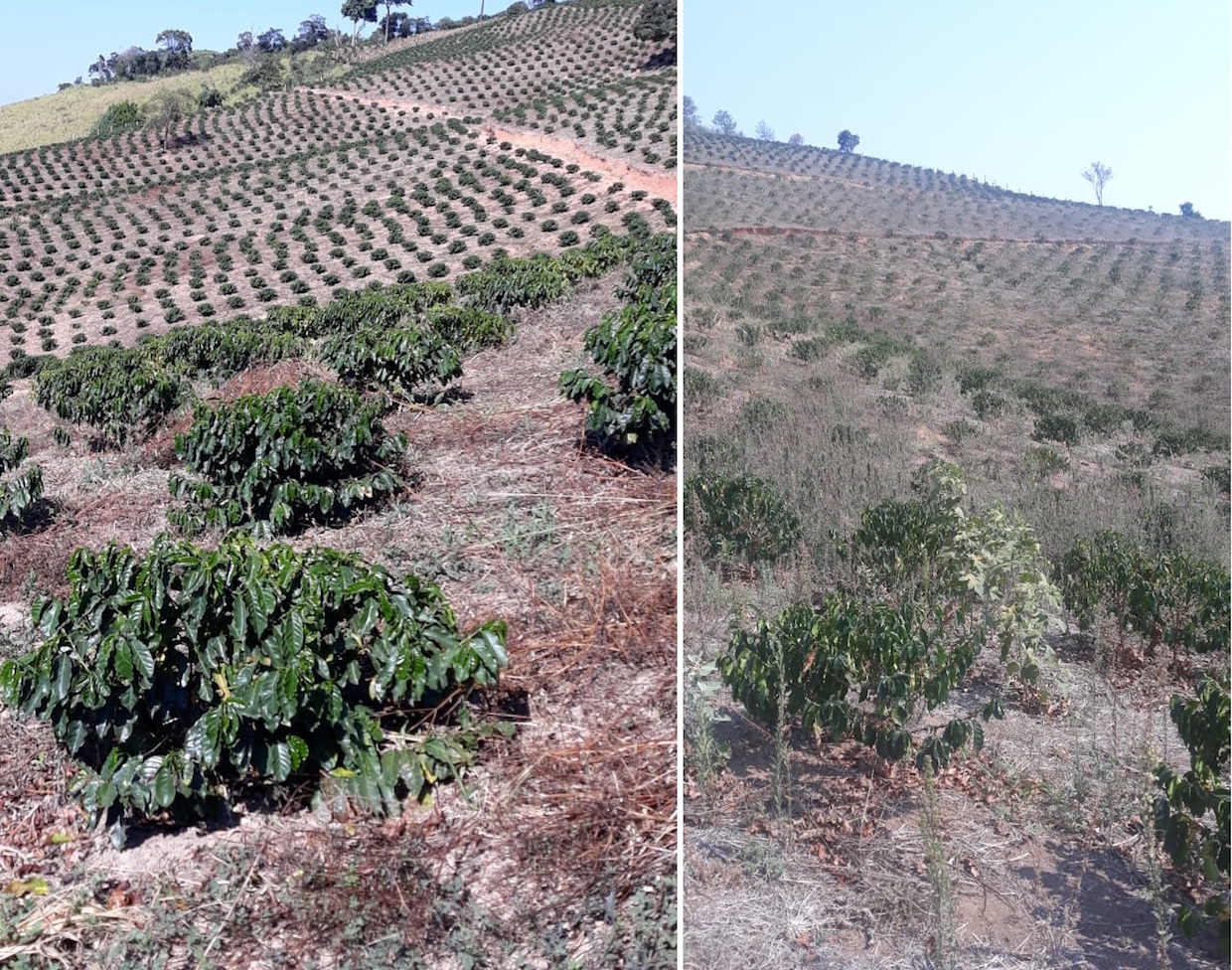 Early high temperatures, dry air and unsteady rain are already likely to have lasting effects on 2021’s harvest, but let’s first clarify a few points about 2020:

Statistics and the 2020 Season

Brazil no longer has a specific centralized board for coffee like the FNC in Colombia, but that does not mean that data collected with other national institutions isn’t useful.

One major source of statistical information for Brazil’s coffee sector is CONAB, the food supply agency of the federal department of agriculture. Their data are public, the methodology is clear and they do updates as the harvest season approaches.

For example, in January of 2020, CONAB estimated the country’s coffee production would be 57.1 to 62.0 million bags. The first surveys in September 2020 indicated a crop of 61.6 million bags of harvested coffee. Thus CONAB’s estimate was remarkably good considering Brazil’s total cultivated coffee land of 2.16 million hectares, which is about equivalent to the total size of El Salvador.

Unfortunately, many national and international institutions also often release early production forecasts with unclear methodologies or statistical methods. This doesn’t mean that their intentions are bad — or even that the data is bad — but it all collectively should be viewed with a critical eye.

According to the latest CONAB survey and technical report, Brazil harvested 47.4 million bags of Arabica this year, representing 76.9% of the total harvested volume. This is believed to be the second-largest crop of all time. It followed optimal harvest conditions, without rain, which also improved the average quality of all Brazilian coffees and the transportation of these beans to ports and warehouses.

Inside the country, there are regular reports of warehouses filled with bags of coffee awaiting processing or export. Meanwhile, according to the latest data released by CECAFE (Brazilian Coffee Exporters Council), Brazil has exported 3.8 million bags since September, a record for the month.

That number would have likely been even greater if it were not for the lack of containers and ships as shipping logistics have been disrupted all over the world.

In short, Brazil produced a lot of coffee this season.

So far, data related to the total 2021 harvest should be considered approximate. Yet for arabicas, predictions can be formed through field observation, data from national weather stations and well-researched behavioral aspects.

A well-known physiological factor for arabica is the biennial nature of production. This happens because of drainage of nutrients and carbohydrates from the plants. One year, the plant may bear more fruit while fewer leaves and branches grow. The next year, that growth pattern is corrected as less fruit forms while more leaves and branches develop.

In Brazil, due to the generally high yields per hectare, this phenomenon is intensified, meaning crop reduction volumes are intensified in down years. For example, in 2018, 45.5 million bags worth of Brazilian arabica were harvested. 2019 followed with a 27.8% reduction, down to 34.3 million.

If you apply that reduction to 2020 into 2021, the result would be 47.5 million bags of arabica in 2020 followed by about 34 million bags in 2021. Yet this forecast doesn’t take into account important factors related to aging plants, newly planted crops or renewed cropland.

Also, there are many climatic factors that will influence the 2021 harvest, particularly predictions of high temperatures and sporadic rains.

Climate and the Future Harvest

To understand climate’s affects on future harvests better, a brief lesson in physiology of coffea arabica may be in order. Under the conditions found in most Brazilian producing regions, the flower differentiation that will be responsible for the following year’s harvest occurs between February and June, meaning the 2021 harvest begins to take shape near the start of 2020. When the season starts to change — factors include length of the day, temperatures, and rains — these flower buds go dormant until the first rains in September, when the flowering starts to happen. 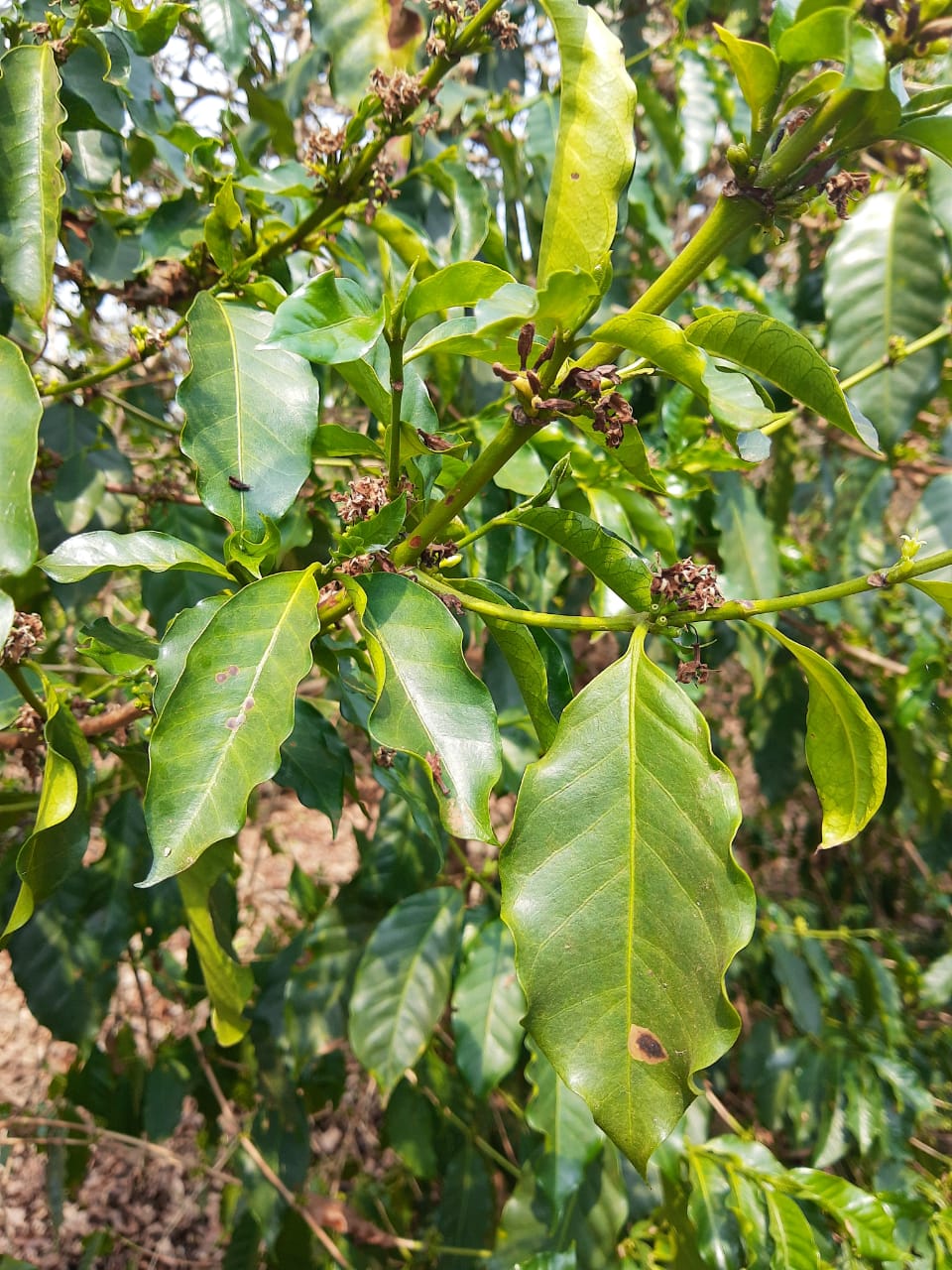 Drought-affected flowers not able to blossom. Photo by Guy Carvalho.

According to meteorological data from SISMET Cooxupé, this year we had good volumes of rain in the differentiation period, but from April to September the volume of water was well below the historical averages.

The early part of the rainy season (September) typically breaks dormancy and triggers flowering. In some producing areas this year, sparse rainfall stimulated flowering. Yet along with higher-than-normal temperatures, this has caused the miscarriage of most of these flower buds. This occurs when, during the flowering, temperatures above 33°C (91.4°F) impair the pollen’s encounter with the flower egg, thus reducing the number of seeds formed for 2021.

Even if the fertilization happens, the seeds in the formation will need at least 40 millimeters (1.57 inches) of rain after the blossom to develop.

There are currently reports and data from big coffee production cities like Patrocinio (Minas Gerais), Franca (São Paulo) and Guaxupé (Minas Gerais) showing water deficits so severe that whole crops have almost all dried, and the production potential for 2021 has been reduced to almost zero. 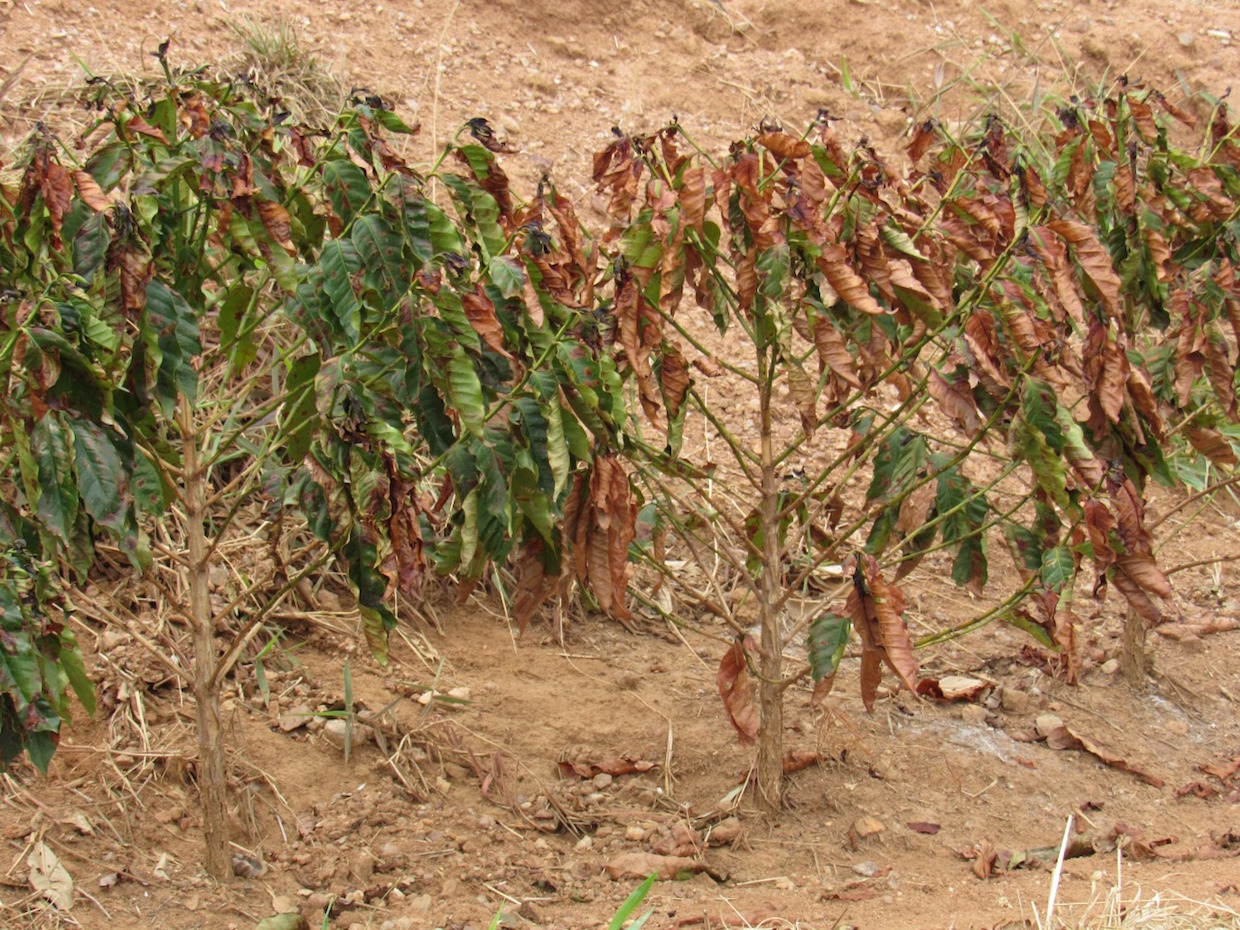 Due to these conditions, producers who would harvest small volumes next year may be deciding to prune their crops to stimulate the sprouting of new branches, accepting a smaller harvest in 2021 followed by a rebout in 2022. According to the same data, many municipalities have been without rains above 2 mm (0.07 inches) for more than 170 days.

Due to the lack of rain, other indirect effects are deteriorating the volume of coffee likely to be harvested in 2021. The dry climate and high temperature have led to higher danger of burning of coffee crops. The number of dry leaves in the soil is higher than the usual, and low-humidity air can spead fires very quickly, often getting out of control.

There are cases of producers who have lost more than 20% of their coffee-growing areas to fire, in addition to losing other farmland and protective native forests. 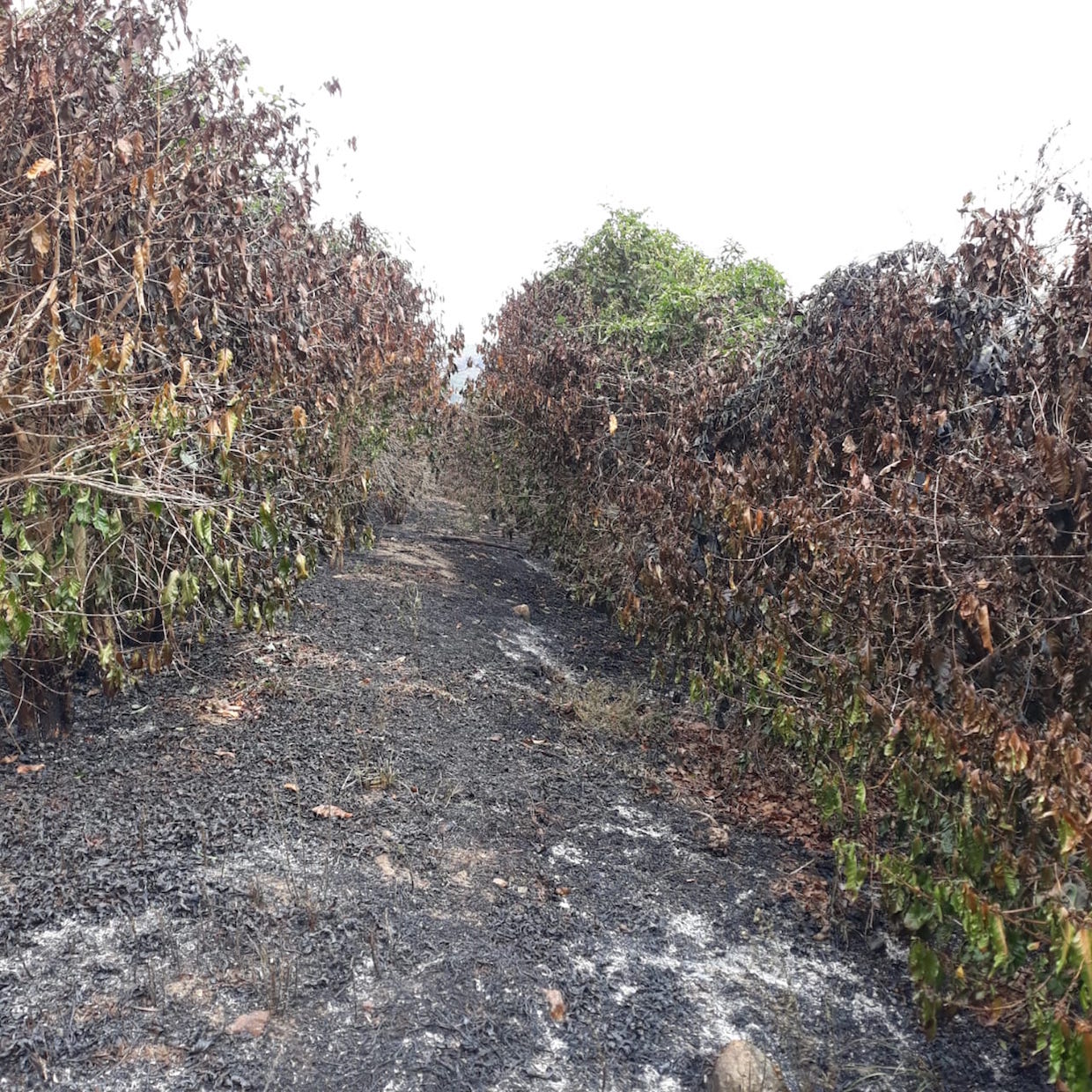 A coffee field scordched by fire. Photo by Jonas Ferraresso.

Another side effect is a delay in the coffee fertilization schedule. In Brazil, growers typically follow well-planned crop maintenance schedules from September to March. This year, due to the lack of rain, fertilizer application has been delayed, and such delays may affect plants for two seasons to come.

The volatility of the coffee market is already well known to producers. Yet the country is also dealing with the devaluation of the Brazilian Real, a fact that can seriously hamper the purchase of many inputs such as fertilizers, fuels or agrochemicals, which are priced in U.S. dollars.

Typically, an increase in input costs combined with low productivity in the biennial cycle might lead to decreased farmer investments. Again, this may affect plant health and productivity for the following two or three seasons. 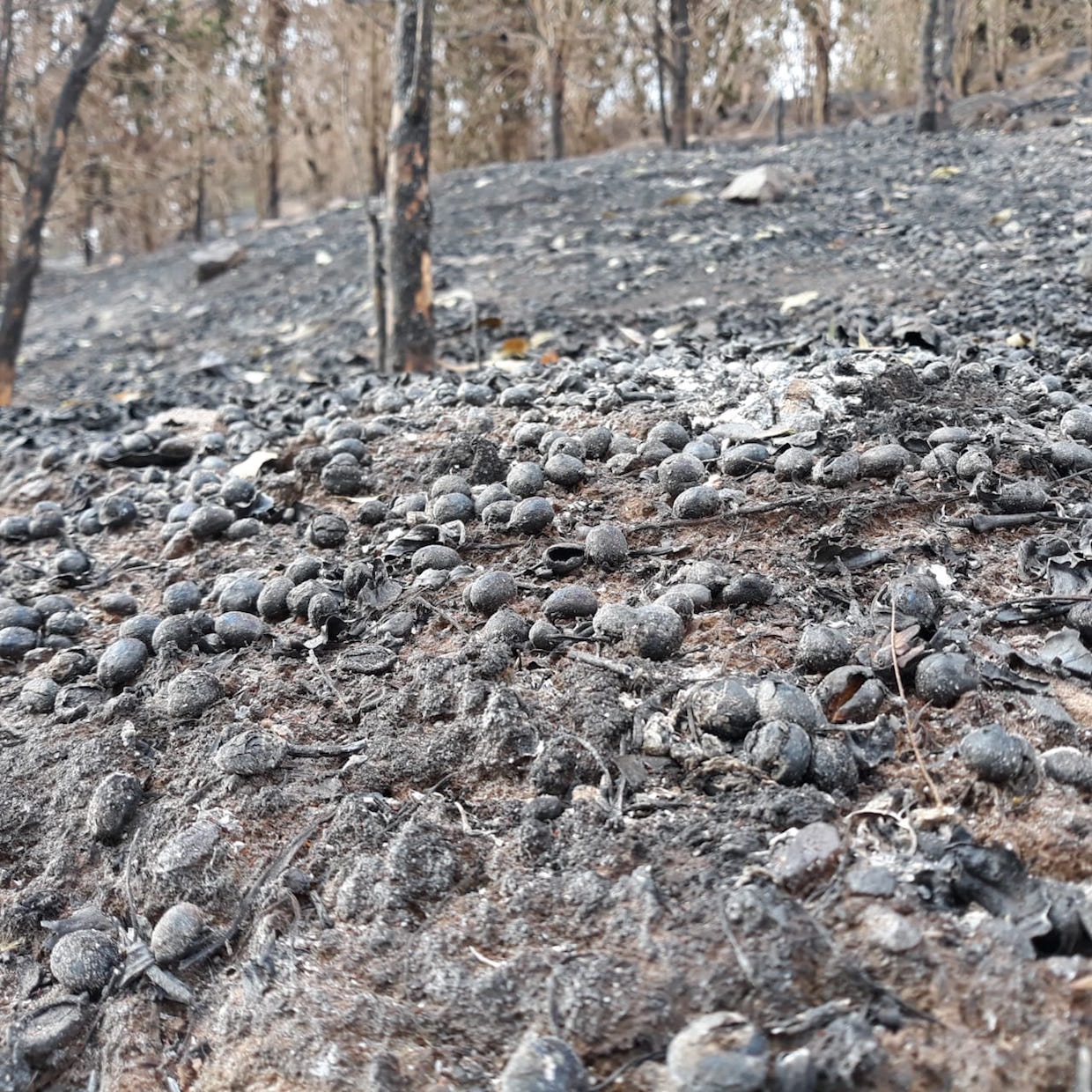 A coffee field scordched by fire. Photo by Jonas Ferraresso.

Adding to all these issues is the fact that the global coffee price remains at historically low levels, further discouraging growers from investing in crop management.

In short, the weather presently being experienced may negatively affect production throughout the Brazilian coffee sector for years to come.

What Can Be Salvaged?

Unfortunately, much of the preliminary data suggest generally low potential for Brazilian coffee farms for 2021. The volumes still need to be studied and surveyed with greater precision by CONAB, but it appears climate changes may lead to irrecoverable damages, even if rainfall does normalize in the coming days.

The Brazilian coffee sector and the coffee industry at large should be heeding the warnings that changing climates are presenting us. The past decade has seen changes in climatic cycles in Brazilian coffeelands that have led to inconsistent rainfall, heat waves, hail, unexpected frost, changes in plant behavior, pest outbreaks and out-of-season diseases.

These climate risks to Brazilian coffee production have already been studied and observed. What’s needed next is more urgent action to protect not just the 2021 crop, but future crops of coffee all over the world.

Jonas Ferraresso
Jonas Leme Ferraresso holds a degree in agronomy from São Paulo State University (UNESP). He has worked as a coffee farmer and as a Agronomist (Boa Esperança Coffee Farm), as a Roaster (Artesan Coffee Solutions), as a cupper and roaster (Amparo Rural Union), and as a consultant. He is based in Serra Negra, São Paulo, Brazil.